Reviews
Pros & Cons
In The Box
Review
Suction
Battery
Weight
Dust Bin
Filter
Carpet Cleaning
Hardwood Cleaning
Crevice Cleaning
Usability
Noise
Maintenance
Accessories
Final Verdict
Why Trust Us
Our experts spend countless hours researching every product and service reviewed on Royal.Reviews so that you don't have to. We crunch down lots of data and provide what matters most to you.
Research Time: 10 Hours

Excellent for cleaning pet hair
HEPA cleans air of mites, pollen, & fine dust as you go
Powerful suction yet quiet
Very simple & convenient to use
Small dust bin
Battery life may be too short
Trigger must be held down to power on

The Dyson V7 Animal comes with the following items out of the box:

The Dyson V7 Animal was launched in 2017 and quickly became one of the most popular cordless stick vacuums on the market, even today. In the medium price range class, the V7 Animal offers great value and performance. Compared to Motorhead, Fluffy, Absolute, and Allergy, the Animal variant is my favorite.

First, only 3 of the top 5 Dyson cordless vacuums offer whole-system HEPA filtration, including V7 Animal. That's really important to me. Second, the V7 Animal model comes with every attachment except the Fluffy Cleaner Head, which can only be used on hardwood floors. Here's a comparison of the top 5 V7 models.

The V7 Animal provides 2 power settings: Normal at 25 Air Watts, and Max at 100 Air Watts. The V7 suction rating is very good. Air watts, to put it simply, is a formula that factors in both the airflow and water lift. It represents the strength and airflow volume capacity of the motor. The V7 model offers the same air watts as the V6 model, and just slightly below the 115 air watt V8 model. All in all, V7 suction is excellent so long as you properly clean the filters (see Maintenance section).

The V7 Animal offers 72 inches of water lift, which is a measurement of how much weight the vacuum can lift with the motor. This translates to how well the vacuum can pick up large, heavy debris. Every V7 model, including Motorhead, Animal, Allergy, Fluffy, and Absolute provide the same water lift rating because they all have the same exact motor and design. The airflow rating specifies the amount of air the vacuum cleaner can suck in with no attachments per minute. The V7 Animal can consume 39 CFM (cubic feet per minute), which is a great amount of air within its price class.

Dyson V7 high efficiency motor
The V7 Animal comes with a small but powerful motor that spins up to 110,000rpm (around 1800 per second!), producing excellent suction and airflow. The V7 motor got a new design from the previous V6 generation motors, featuring 15 small cyclones that produce massive g-forces and optimized to filter out particles about 100 times smaller than the size of a human hair (those cyclones at the top of the vacuum aren't there for cosmetics!). The V7 motor also saw an increase of 75% of power at the brush bar than the previous V6 generation.

In terms of raw power, the V7 Animal motor showed excellent performance and ability to pull both small and large particles.

Blue light indicating charging
The V7 Animal has 2 power settings: Normal and Max. Normal offers a good 30 minute run time without any attachments (20 minutes with direct drive cleaner head), and 7 minutes on high setting regardless of attachment. This is up from 20 minutes on the V6. The V8 provides 40 minutes of run time, and each subsequent release offering even more run time, at the expense of getting heavier and bulkier.

30 minutes should be enough for an average 2000 sq ft house, but you have to factor in floor type and extent of cleaning. For instance, vacuuming carpets will consume more energy than vacuuming hardwood floors for the simple reason that the motorhead meets a lot more resistance when driving the brush through carpet. If you decide to vacuum every crevice, baseboard, and ceiling fan, one charge might not be enough.

Weighing a manageable 5.3 lbs, the V7 V7 is up from 4.6 lbs of the previous V6 generation. The extra weight is in part due to a larger battery that extends run time to 30 minutes and other improvements. Relative to V8, V10, V11, and subsequent models, I would still consider the 245202-01 low to medium weight. It's easy to hold and maneuver, even for an extended period of time.

Click to play
Emptying the dust bin quickly and easily
The V7 Animal dust bin is 25% larger than the V6, filling at a modest 500ml (0.13 gallons). Even with the increase in size, it's still fairly small, and you will have to make extra trips to the trash can if your house is extra dirty. This dust bin got a surprisingly great overhaul from the previous generation of V6 dust bins in terms of simplicity and ease of use. Simply lift the small red handle up and bottom of the dust bin will fly open, releasing all the dust and debris directly into the trash can, without getting your hands dirty. The see-through canister design is great because you can see what is being picked up and how much.

Emptying the bin is quick, convenient, and clean. Should any hair get wrapped around the collector head refusing to drop down, simply shake the container or reach in and pry it off. While the design is great, points are removed for its small size.

Click to play
Removing the pre-motor filter
The Dyson V7 Animal comes with a first stage pre-motor filter that removes relatively small debris as it enters the vacuum, but before it reaches the motor compartment. This allows all the larger particulates from remaining in the dust bin, and not pass through the motor stage.

Small dust particles, allergens, mold, and bacteria will still pass through the pre-motor filter, getting pushed right out into the air you breathe unless the vacuum has a HEPA filter installed.

Luckily, the V7 Animal does have a whole-system HEPA filter installed, which will trap all those undesireables within the high efficiency filtration system. This helps clean your air as you vacuum, keeping you and your family breathing fresh and clean air.

Click to play
Effortlessly picks up all carpet debris
Many tests show that the Direct Drive V7 cleaner head (comes included) picks up debris from carpet with ease, large and small. Using the stiff nylon bristles, the brush drives deep into carpets to capture hard to reach dirt. Rice, Cheerios, oats, flour, and sand is picked up with no issues at normal power setting and normal cleaning pace. The vacuum also picks up pet and human hair with ease. The brush will get tangled if enough long hair is picked up, but that is to be expected.

The dual-brush cleaner head intake is slightly smaller than the V8 version and has fewer air gates which leads to higher suction. This makes this cleaner head great for deep cleaning your carpets and picking up the deep seated debris.

Click to play
Struggles picking up large debris on hardwood floors
The V7 dual-brush cleaning head picks up fine dust with ease on any type of hardwood floors. Its high suction makes it a breeze. However, picking up larger bits like cheerios is an issue, as it tends to push the debris forward instead of picking it up. This is simply because the suction style brush roll cleaner head is not ideal for hardwood floors. It was designed to be used for both surface types, but it ended up being good for just carpets. If your house floors are primarily hardwood floors, you want to look for a vacuum with a soft roller cleaner head such as the V7 Fluffy model.

The 245202-01 offers great usability. Transforming the vacuum cleaner from handheld to stick (and vice versa) is simple. All it takes is a push of a button to quick release the pieces, and snap in the new extensions in seconds.

The V7 produces moderate noise levels, clocking in at 65dB normal setting and 74dB on high setting. This makes it just slightly louder than the V8 version, but not by a big margin.
Q: How loud is the Dyson V7?
A: The Dyson V7 is moderately loud, ranging from 65 to 75 dB.

Maintaining the Dyson V7 Animal is relatively easy. First, empty the dust bin when the debris level reaches the marker on the side of the canister. Second, remove and clean the blue pre-motor filter located at the top of the cyclones under running water once a month. Next, remove and wash the post-motor HEPA filter under running water once a month. Dry both filters for at least 24 hours before attaching them back. If the filters are not dry (especially the pre-motor one) then the moister can damage the motor. Following those steps, the V7 Animal will operate nicely for years to come. Neither filter needs replacement. 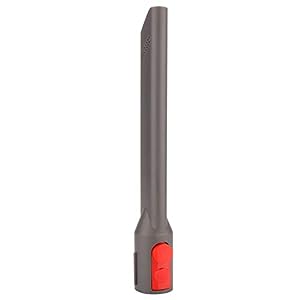 Click to play
The crevice tool is included with the V7 Motorhead, V7 Animal, and V7 Absolute which is extremely useful when trying to reach between tight spaces and crevices. This tool provides higher, concentrated suction power necessary to maximize reach in hard to reach spots. It's one of my favorite tools to use when cleaning. 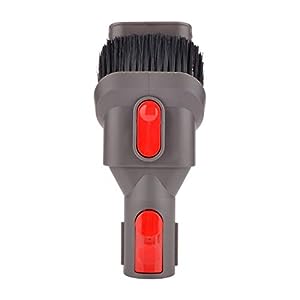 The two in one combination tool is included with the V7 Motorhead, V7 Animal, V7 Absolute, and V7 Allergy models and provide a convenient dusting brush which can be switched to a general nozzle for upholstery by holding down the button and pulling back the brush. In addition to cleaning upholstery, this tool can be used to clean the baseboards, vents, window sills, pick up webs, and a verity of other things. It's a great multi-purpose tool and you'll find new things to clean with it all the time.

The V7 combination tool will not fit a Dyson V6, however, it will fit a V8, V10 and V11 Dyson cordless vacuums. 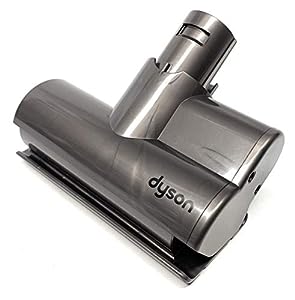 The mini motorized tool comes with the V7 Animal, V7 Fluffy, and V7 Absolute. It's got a 20W electric motor that spins a brush to get deep seated debris out. This tool is great to clean your car with. The cleaning head tilts and adjusts to the angle of the surface to maintain constant suction. This tool is also wonderful for cleaning carpet stairs. Simply remove the wand from your V7, attach this tool, and you're ready to tackle the stairs. 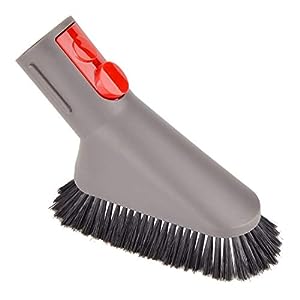 The soft dusting brush tool comes with the V7 Animal, V7 Fluffy, and V7 Absolute. The soft brush does wonders for vacuuming delicate surfaces such as TVs, computer monitors and keyboards, laptops screens, wooden furniture, window glass, and many others. It would be impossible for me to get by without the soft brush, I highly recommend to get it. 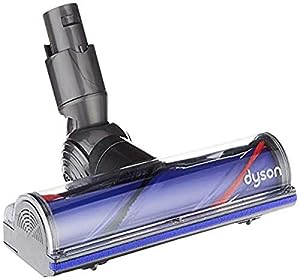 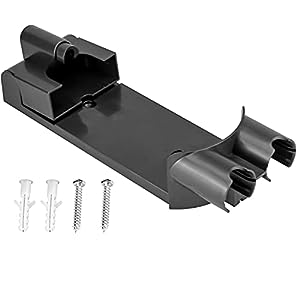 The Dyson V7 Animal is an excellent all around vacuum. It comes with a high efficiency, air cleaning HEPA filter which the Motorhead and Absolute models do not. I highly recommend HEPA filters because they clean out mold, bacteria, fine dust, and pollen as you clean. This vacuum comes with every attachment except the Fluffy Cleaner Head which can be picked up separately for a complete accessory set. If you do not have a lot of hardwood floors, this is absolutely the #1 recommended vacuum out of all the V7s.

The V7 Animal is a tried and true cordless stick vacuum cleaner which can easily transform into a handheld vacuum cleaner. Although it was released in 2017, this vacuum has really stood the test of time as it's still one of the top selling vacuum cleaners on the market today.

Questions or Comments? Leave a reply! 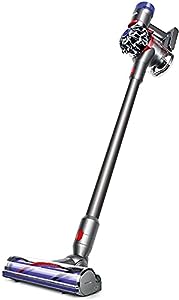